UPDATE 10 Feb: Whoa didn’t expect that sudden surge of readers. Apparently in this thread on FB, Vishen claims Mindvalley doesn’t serve their programs in Malaysia – which would nullify the point of this blogpost. Well I don’t have the time to do real investigative journalism, but I did reach out to WildFit (screenshot below) and they verified that their program is “meant for the whole world”. Which includes Malaysia, naturally. I can’t verify whether or not Vishen or Mindvalley is getting any financial gain from WildFit directly or indirectly from this whole campaign, and again, I didn’t attend the masterclass nor any of Vishen’s press conferences and all that, so I can’t prove anything, and really, it’s not my mission to do anything.

The point of this blogpost stands: Neither Milo nor Vishen are evil nor selflessly good. It’s marketing vs marketing. Feel free to disagree.

Unless you’ve been living under a rock the past month, you’d have heard of Vishen Lakhiani of Mindvalley’s video that’s causing this major uproar saying Milo has been lying to you and it’s full of sugar and you should stop drinking it and blah blah blah. I’m not going to link his video to give him more views, because here’s the bottomline of that video:

He is just trying to sell you his WildFit diet course. This video is an advertisement for a diet programme.

Below: Progression of sales funnel (I’m just guessing on the last one, I didn’t attend the masterclass). A bit of a disclaimer here before you go kneejerk back at me:

I’m not going to respond to everything Vishen’s video is claiming about, only that supposedly Milo is a terrible drink. Well, I agree that it’s not a superdrink, it’s definitely not going to “minum Milo anda jadi sihat dan kuat”. But compared to many other commercial drinks out there, come on, it’s bloody good bang for buck. Here are the facts:

I’m not passionate enough about the subject to give you healthy alternatives – but there’s Google for that. All I’m saying is:

Milo may not be super healthy, but it’s far from evil.

Vishen/Mindvalley may be healthy, but he’s far from “being the good guy”. He’s trying to sell you his course, guys.

You wanna boycott Milo? I can’t stop you. Pointless, but hey it’s a free world. You wanna continue drinking Milo? Welcome to the club – I’m still enjoying my 3-tbsp Milo-O every couple days. Better than starting the day with a Frap, of this I assure you.

(Again – I’m not super healthy so take my opinion with a pinch of salt. It’s just an opinion)

My general philosophy: Eat a varied and nutritious diet, exercise enough, and sleep well. Good enough for me. 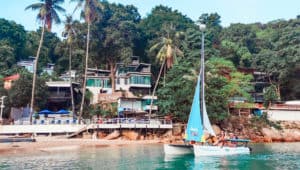